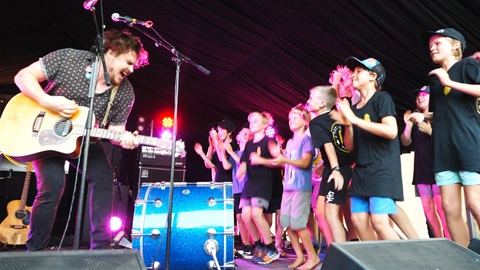 Talented young musicians from the Surf Coast will take to the FReeZA stage, as part of this year’s Aireys Inlet Music Festival, taking place March 18-20.

Established in 2008, originally as the Aireys Inlet Open Mic Music Festival, the event is a major tourist attraction with a surprise headliner each year featuring former artists such as Tim Rogers, Tash Sultana and Dan Sultan.

The FReeZA initiative, now in its fifth year at the festival, gives Surf Coast musicians the opportunity to showcase their talent, and will be the only stage running on Sunday.

Installed at the Great Ocean Road Mini Golf, the stage will see a dozen young musicians perform from 11 a.m. to 4 p.m. on Sunday March 20 to close the program.

Mayor Libby Stapleton said it’s an exciting time for all up-and-coming artists, from those performing two to three songs to musicians whose sets are 30 to 40 minutes long.

“The FReeZA Stage is a great initiative, and the opportunity to perform to large crowds in front of other musicians is truly exciting for our young Surf Coast talent,” said Cr Stapleton.

“This is a high point on the FReeZA schedule, and a spot on stage is in high demand. It’s also a great opportunity for future event managers, with Lorne P-12 students participating.

As part of the festival, local students take on a range of important roles during the day, such as MC, photographer and stage manager.

Typically, the festival hosts nine stages over three days, with over 150 acts, culminating in a mystery performer on Sunday afternoon.

For the first time, the mystery guest was announced ahead of the event, with Josh Teskey of the Teskey Brothers performing a day before the regular schedule.

“With the majority of acts taking place on Friday and Saturday, our young musos will have the only attention of the festival on Sunday which is really exciting for them,” said Cr Stapleton.

“After a tough few years going through the pandemic, I’m so happy that a fantastic festival like this can take place and create opportunities for future artists.”

/Public release. This material from the original organization/authors may be ad hoc in nature, edited for clarity, style and length. The views and opinions expressed are those of the author or authors.View Full here.