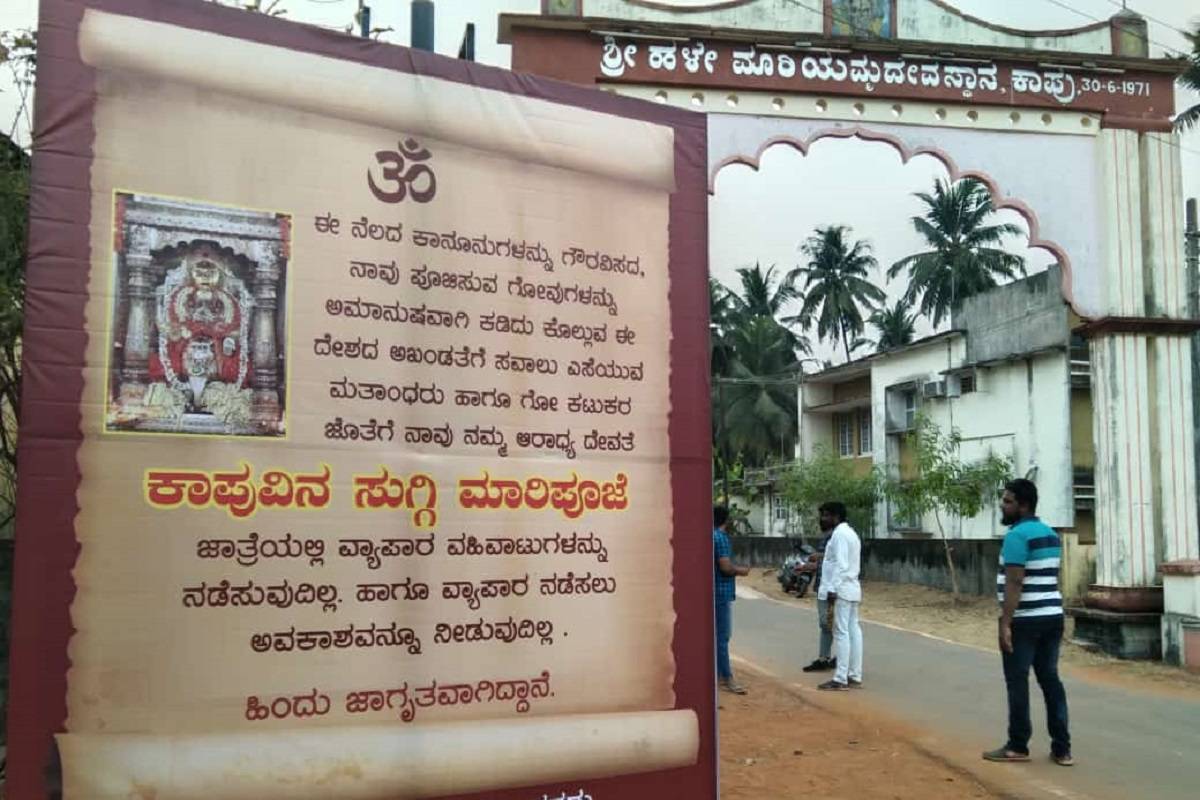 The move came after groups such as Hindu Jagarana Vedike and Tulunadu Hindu Sena, Kapu appealed to the temple management not to allow Muslim traders on a two-day religious fair.

Maari Gudi Temple management in Kapu town, Udupi district, Karnataka coast, has decided not to allow ‘people of other faiths’ to do business on its grounds during the annual festival of the temple at the request of some pro-Hindu organizations. This action was taken after groups such as Hindu Jagarana Vedike and Tulunadu Hindu Sena, Kapu, asked the temple management not to allow Muslim traders during the two-day religious fair on Tuesday March 22 and Wednesday March 23. .

The organizations said Muslims supported a bandh against the High Court’s verdict on the hijab issue, which showed their contempt for the law of the land and the judicial system in India. “The pro-Hindu organizations have submitted a memorandum asking us to only allow Hindu traders during the Marigudi festival and not people of other faiths. As a result, the temple management has decided not to donate any land in lease belonging to the temple management to anyone who is not a Hindu. Only Hindus will have space to do business,” a temple leader told reporters in Kapu.

Prakash K from Hindu Jagarana Vedike said Maari Puje in Kapu town is a very big festival in Udupi district in which a large number of Muslim traders do business here. “Those who have no respect for our gods, our places of worship and who follow a different faith should not do business during our religious festivals. This was the call from the Hindu community to the leadership of the temple of Marigudi,” he told reporters.

Explaining the reason for the appeal, he said recently that Muslim traders had observed a statewide bandh against the hijab verdict handed down by the Karnataka High Court. The Karnataka High Court Full Bench headed by Chief Justice Ritu Raj Awasthi in its March 15 order dismissed petitions from some Udupi girls who had asked for the hijab to be allowed inside educational establishments. education where there is a uniform rule of dress.

The court said the hijab was not an essential religious practice and the dress uniform rule should be observed. Two days after the verdict, Muslims on a call given by the Ameer-e-Shariat Maulana Sagir Ahmed Khan Rashdi observed the bandh on March 17. They did not open their shops and commercial establishments.

“They (Muslims) have no respect for the law of the land and the verdict of the High Court,” Prakash said. According to him, the temple management responded positively to the request of the Hindu community and they decided not to allow people of a different religion to do business in the temple premises this time.

“Allowing people of different faiths to do business in the temple premises would lead to conflicts in the future because today the Hindu society is angry. It can go to another level,” Prakash said.

The head of the Hindu organization said that this trend will not be limited to Kapu but everywhere. He added that Muslims will not be allowed to do business during the religious festival of Ujire. “They should not be allowed to do business during our festivals. Because we had opposed the slaughter of cows in Gangolli, the Muslims boycotted the buying of fish from the Hindu fisherwomen. Although there were fewer , when they show their strength, why shouldn’t we the majority Hindus show ours?” he said.

Meanwhile, Udupi District Secretary of the Communist Party of India (Marxist) Balakrishna Shetty has written to the Deputy Commissioner of Udupi to intervene and ensure that such developments are not allowed as they could take on a different dimension. across the state and lead to polarization on communal lines. .

Speaking to PTI, the co-organizer of Bajrang Dal for all India, Suryanarayana Rao clarified that the organization is not against Muslims but only those who oppose the rule of land and the verdict of the High Court on the hijab. He added that the “Hindu sensitization campaign” will continue in other parts of the state against the “anti-national elements, who oppose the Constitution, the judiciary and the political system”.

Meanwhile, the Udupi District Street Vendors and Traders Association has urged the district administration to allow Muslim street vendors to conduct their business during Hindu festivals and annual temple fairs. Speaking to reporters in Udupi, the association’s district secretary, Mohammed Arif, said banners were placed at the annual Kaup Marigudi festival stating that Muslim vendors should not be allowed to enter. Similar banners were also displayed during the Padubidri temple festival.

Until now, all Hindu and Muslim vendors were doing business as brothers, Arif said, adding that Muslim street vendors used to do business at festivals in all temples. “We ask the temple administration committees to allow us to do business as before,” he said.