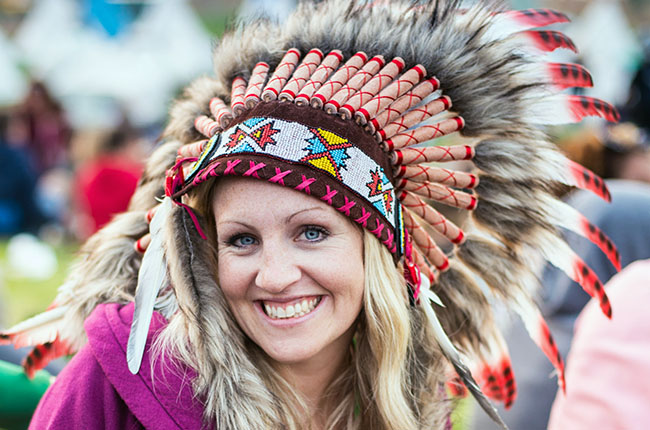 Attendees of this year’s Bass Coast Festival will not be allowed to wear Native American-style headdresses and war bonnets when the EDM Festival hits Merrit, B.C. August 1-4.

â€œFor a variety of reasons, the Bass Coast Festival bans feathered war bonnets, or anything that looks like them, on site. Our security team will apply this policy.

â€œWe understand why people are drawn to war bonnets. They have a magnificent aesthetic. But their spiritual, cultural and aesthetic significance cannot be separated.

â€œThe Bass Coast Festival takes place on Indigenous lands and we respect the dignity of Indigenous peoples. We have consulted with the aboriginal peoples of British Columbia on this issue and we believe our policy is consistent with their views and wishes on the subject. Their opinion is what matters to us.

Any music fan who has attended Coachella, Electric Daisy Carnival, or one of the many other similar music festivals can attest that non-Native Americans wearing Native American clothing is commonplace. While the rule seems difficult to enforce across the festival, Bass Coast’s message is clear.

This year’s Bass Coast lineup includes Ottawa’s Indigenous trio A Tribe Called Red, which infuses EDM music with Native American influences. Band member Ian Campeau told Huffington Post Canada: â€œI have yet to speak to someone who is a member of a First Nation and who wears fake headdresses and war paint at EDM concerts. . It’s ‘redface’. Just like â€œblackfaceâ€.

Earlier this year, Pharrell Williams drew heavy criticism for his appearance on the cover of Elle United Kingdom wearing a Native American headdress, for which he has since apologized. Wayne Coyne of the Flaming Lips was embroiled in a messy public argument with ousted drummer Kliph Scurlock, who accused the leader of anti-Native racism for supporting this type of hairstyle.

And of course, the issue of cultural appropriation in the music world goes beyond Native Americans. For example, Selena Gomez was criticized for wearing a Hindu bindi during a performance at the 2013 MTV Video Music Awards, and Katy Perry garnered similar disapproval for performing at the 2013 American Music Awards dressed as a Japanese geisha.

The places of jazz festivals