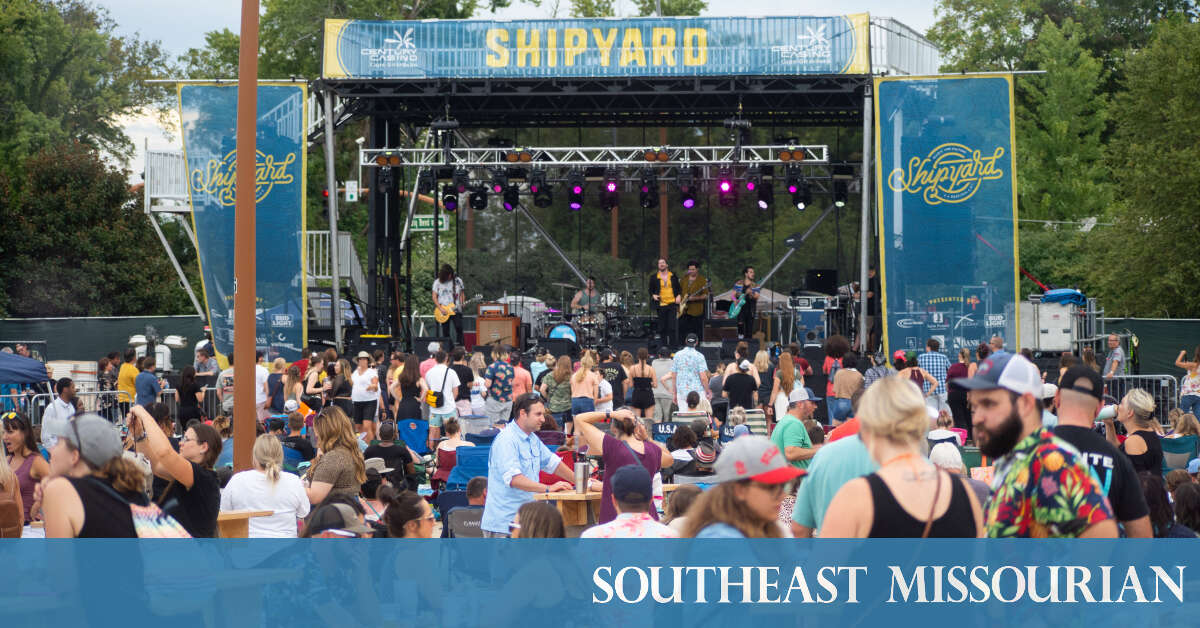 Get ready to celebrate good food, song and joy: it’s the shipyard’s fourth annual music festival, Friday and Saturday, September 23 and 24, at the Century Casino Cape Girardeau. Come spend time with your community while listening to touring national and local bands, participating in sponsorship experiences, and giving back to causes that matter throughout the Southeast Missouri region. Get your tickets and more information at www.shipyardfest.com.

Samantha Fish: Watch a performance by Samantha Fish, and you’ll be surprised that at 17, the shy teenager had to be persuaded onstage and switch from drums to guitar. In a traditionally male-dominated blues scene, the Kansas City native is taking the world by storm with her high-energy gigs, house guitars and shredded solos, winning awards and claiming No. 1 spots on the charts. Billboard along the way.

Yonder Mountain String Group: Hailing from the snow-capped peaks of Colorado, the Yonder Mountain String Band has taken their brand of bluegrass/jam band around the world and played on more festival stages in 23 years than you can shake a fiddle bow. Known for redefining the genre and improvising throughout a set, Yonder’s live shows are an immersive adventure that hundreds of thousands of people have experienced at Red Rocks, Bonnaroo and countless jam sessions from coast to coast. the other.

Maggie Rose: If you want ideas of what it’s like in Bonnaroo, you were pretty much there if you follow Maggie Rose on Instagram. The Nashville-based singer-songwriter is no stranger to the big stages, bringing his brand of soul-folk-funk to Peach Fest, Moon River and Newport Folk Fest, as well as playing The Grand Ole Opry over 80 times; so, she should fit right in when the lights come on at the shipyard. After a full series of summer tour stops, Maggie is ready to host a vocal clinic when she lands in Cape in September.

Grizfolk: Based in Los Angeles and Nashville – with roots in Sweden – Grizfolk are a band worthy of a road trip playlist. The songwriting is always tight, the beats boppy and, as Billboard called them, “a bit of country, a bit of rock, and a lot of catch”. See what it’s all about when they enter CG in September and all become Swedish-American Alts on the shipyard scene.

Get the last thing of every day in the morning.

Reverend Peyton’s Big Damn Band: Treat yourself to a healthy dose of rural realism and revival energy from the big tent of Indiana’s favorite blues band this September. With Breezy on the board, Sad Max stomping the buckets, and The Rev establishing his brand of borderline punk 1930s steel slide guitar, Reverend Peyton’s Big Damn Band might be the biggest surprise you’ll find at the shipyard this year. They’ve brought their three-part stage party to every major festival from Bonnaroo to Telluride and Austin to Austria, and were even crowned “Best Band of Warped Tour” in 2010. The RPBDB sound is a throwback he a century ago, while touching on the themes of money, morality and social responsibility. And a good braise. If we had to tell you one band not to miss at this year’s festival, you check them out.

Fanfare LowDown: Take some dancehall and street beat, mix in a healthy dose of hip hop, jazz, reggae and soul, then mix in nicely with lots of horn, and you’ve got the second-line sound of Lowdown Brass Band. People have been having fun with parade-style brass instruments for over 100 years. LDB bends this genre at will, bringing a heart-pounding, rousing party with depth and fluidity. And a sousaphone. The Chicago-based outfit will be parading New Orleans in CG this fall, bringing its seamlessly blended model of emcee + musicians to the shipyard scene. We recommend that you join the party.

Arkansauce: Arkansauce is a four-piece string band hailing from the wilderness of northwest Arkansas, bending the rules and blurring the lines between bluegrass, newgrass, folk, Americana, country, blues and funk. Their roots date back to 2011 and are firmly entrenched in the Fayetteville music scene, while the road-tested outfit makes annual rounds to festivals and venues across the country. An Arkansauce ensemble is loaded with improvised guitar, banjo and mandolin, paired with a wealth of harmonies and plenty of driving bass grooves. When you’re lucky enough to park it in the presence of a four-piece like Sauce, “you hang on to what you’ve got and let time take care of the rest.”

Wildermiss: Wildermiss is a Nashville-based indie rock band from Denver that will have you wanting to dance and take a road trip. They toured opening for Oh Hellos, performed on Last Call with Carson Daly and during the pandemic played shows on a flatbed trailer in front of their house. Their music is infectious, and depending on who’s cutting their hair how, there’s at least one mule in the band, so they should fit in well in southeast Mo. Wildermiss’s music feels like first get your license in a small town, that sort of summer-windows down freedom and possibility and desire, before you know how it’s all going to turn out. They have grown.

Mike Mains and Branches: Coincidentally, Mike Mains started writing songs between shifts at a casino. In September, he will perform these tracks at our house, joining 16 other artists at Shipyard 2022. Since forming in 2012, Mike Mains & The Branches have shaped their indie rock sound around the idea of ​​”fighting numbness with joy, pain and wings”. fly.” Their raucous shows will put you on your feet as you explore love and the murderous ups and downs of life together. That’s a lot to expect from any Nashville band, but we can guarantee that this will be a fun set you won’t want to miss, so don’t.

Dogs : Hounds are perhaps the biggest surprise you’ll find in the 2022 Shipyard lineup. For example, the video for their first single album, “Shake Me Up”. In a punk guy’s sidekick to ‘Shake It Off’, the St. Louis quartet mixes greasy 1950s rock with the absurd antics of the Monkees and spins it all Wes Anderson-style. September’s trip won’t be their first rodeo at Cape Girardeau: they’ve already done a CG stint as the original Clockwork. If you were there for this show, you will hear different sounds all around. At the time, they were heavily influenced by Coldplay and Kings of Leon. Now there are layers of Zeppelin, Beatles and The Turtles. And a lot more synth. You don’t want to miss this one.

The Burney sisters: These three Columbia sisters have already achieved so much in their burgeoning careers, from sharing festival stages with The Avett Brothers and Sheryl Crow to playing intimate house shows across the country. In September, Olivia, Emma, ​​and Bella bring the family to CG to kick things off Friday night at the shipyard. Don’t miss this show. We want to be the Burney Sisters when we grow up.

Hunter Hat: Hunter Hathcoat hails from the wilderness of Ellington, Missouri, bringing his brand of country music (it’s kinda dang country) to The Yard. Beyond his writing chops, smooth acting, and red-soil delivery, Hunter is just a really nice guy. We recommend 10/10 to have a beer with him at the shipyard.

Mike Renick: Mike Renick is probably no stranger. When he’s not fundraising for a good cause, rocking Dad’s life or presenting today’s country hits through your radio, Mike is known for play one or two of his own songs in the Cape Town area. We caught up with the local legend earlier this year to bottle a few of those tunes for the Scout Sessions, and you can hear them all live from the Shipyard Stage this month.

Jessie Ritter: Jessie Ritter returns home to join the party. Now splitting her time between Nashville and Northwest Florida, Jessie continues to carry her charm on the road with a heartfelt brand of songwriting that plays just as well on country radio as it does in a campground or in the main piece by Annie Laurie. So you know it’ll be a beautiful setting when she takes to the sessions stage next month. Don’t miss it!

Jeremy Todd: Jeremy Todd comes to us from sunny southern Illinois, packing his brand of songwriting that grapples with themes of personal loss and hard-earned redemption, with a dash of humor to keep things light. Whether it’s addressing the fear of mortality, dealing with the brutal honesty of parenthood, or admitting the complicated truth of relationships, Jeremy dives headfirst into the realities of life – the good ones, the bad and hard-won lessons of a life truly lived.

Logan Chapman: Logan Chapman is one of the hardest working artists you’ll find on the tri-state scene, playing at every winery, bar, restaurant, venue and farmer’s market that will free up space for a singer-songwriter can do its job. First making his debut in the blues/punk group Odd Moses, Logan launched out on his own, acoustic guitar in tow, to develop his brand of solo troubadour. This road leads to Shipyard this year and a set at the fan-favorite Scout Sessions stage.

Pfunk Date: Pfunk Dat is made up of four friends who are on a mission to create, bring together and inspire. Dave, Raj, Matt and Ethan have come together to form the funky local jam ensemble who believe “music is the only language everyone understands”. And they speak our language well.