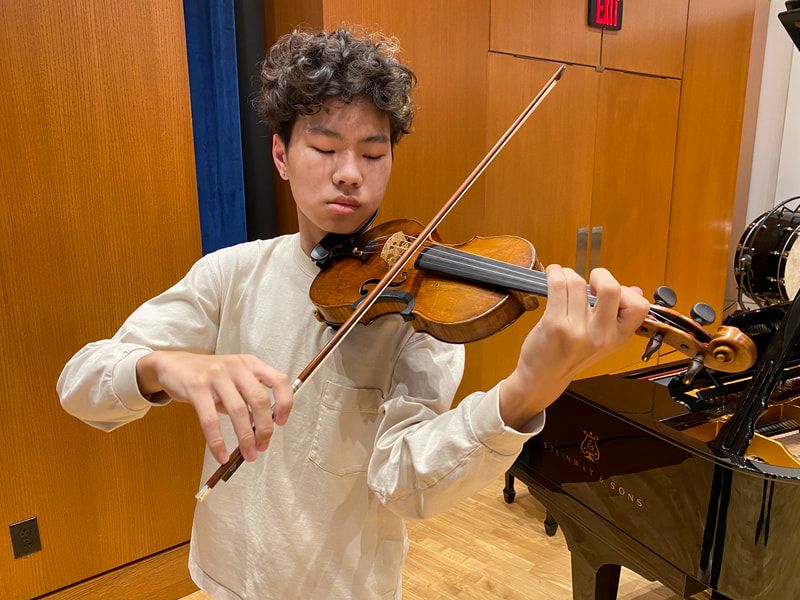 The program, led by Gene and Chika Wie, ran from June 27 to July 2 at Choate’s Ann and George Colony Hall, a state-of-the-art auditorium with more than a thousand seats. For five consecutive days, the festival offered students the opportunity to prepare for a solo final with professional orchestral musicians.

“I’ve never really played with an orchestra, so it was a really cool experience,” said Joyce Liu, violinist and member of the Choate Class of 2025.

In addition to rehearsals, students participated in discussions and workshops on practice strategy, musician wellness, and careers in music. In preparation for the performance, each musician focused on their own piece of music and practiced for at least three hours a day.

“It was a very rigid schedule,” said Gavin Boudreau, the only clarinetist in attendance and a member of Choate’s class of 2024. given time.

“The workshops and sessions really helped,” Liu said. “My performance was better than I expected.”

Gene Wie, the director of orchestras at Choate, a private school, began developing the festival model with his wife Chika about 10 years ago. Previously residing in California, they ran the program at community centers, public schools, and their last school, St. Margaret’s Episcopal School.

“Our goal was to find a different way to do a music festival,” said Gene Wie. “The barrier to entry to playing a solo orchestra is really, really high. And generally, it’s not very fair.

During the pandemic, the Wies continued to deliver the program with a self-developed online system, which allowed hundreds of children to play and connect with each other despite being at home. .

After assuming the role of Director of Orchestras at Choate, Wie brought the program back in person to continue fostering a community of young musicians and providing an otherwise inaccessible solo stage. Anyone – a six-year-old from New York or a high school student from Tokyo – can apply by submitting a recording of themselves performing.

Artemis Simerson, assistant concertmaster of the New Haven Symphony Orchestra and violin teacher at Choate, said, “It’s just beautiful to see children from all over the world blending together so beautifully socially, musically.

Although the West Coast transition took the Wies away from their previous connections in the music education community, word of mouth has already won them a following on the East Coast.

“I actually already have a few other clarinet students who have inquired about next summer,” said Gene Wie, who pushes the program to be open to string and wind players rather than string plus one. clarinet.

After successful experiments this year, Gene Wie hopes to extend the festival to two weeks and include an evening chamber music element, furthering the immersive learning experience.

“When you see people working so hard, being so happy, and always wanting to start over, that’s great news,” Simerson said. “Congratulations to the Wies for making this all up, sure.”

Yoyo Zhang is a member of the Choate Class of 2024 and a section editor at Choate News.