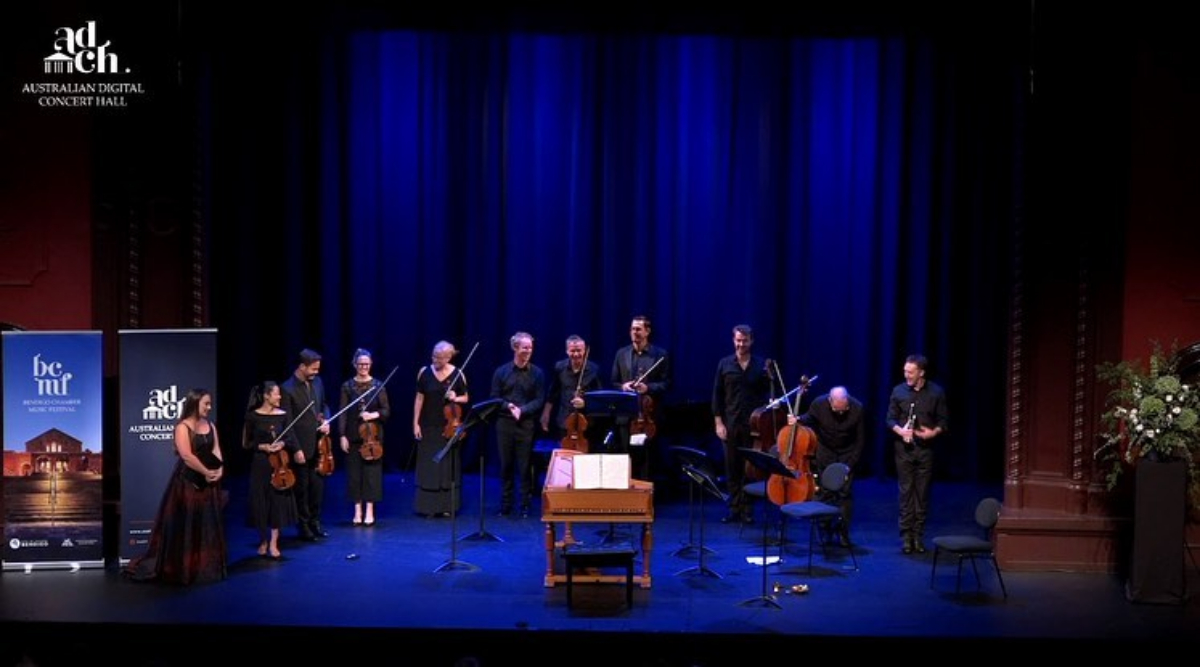 A five-day feast of first-class music that could so easily have never happened has defied all odds to become a resounding success. Only 12 of 150 subscribers to this year’s Bendigo Chamber Music Festival stayed away as co-directors Chris Howlett and Howard Penny negotiated COVID restrictions, injured or ill musicians and last-minute ringtones and program changes to bring 17 concerts and 20 musicians to live audiences.

And thanks to the Australian Digital Concert Hall, the festival reached real-time online audiences across the country.

Here’s a roundup of what was on offer after the gala concert that kicked off the festival on Wednesday night.

Rising 19-year-old cellist Charlotte Miles gave a magnificent recital showcasing her skills which were developed by Penny, who is in charge of strings at ANAM. She was selected as an emerging artist for the Australian Chamber Orchestra, and showed us why in a varied program accompanied by Daniel de Borah on piano. She drew from a wide palette – Boccherini and Bach, certain Franchomme and Ligeti to Rachmaninov and Messiaen. What talent ! The enormous technical challenges of the furious of Ligeti capriccio perpetuo motorcycle of his Sonata for solo cello have been carried away with great aplomb. His maturity was shown in an intensely moving excerpt from Messiaen Quartet for the end of time.

Later, Howlett gave a lecture on the life and work of Clara Schumann, illustrated by pianist Amir Farid’s sparkling interpretation of the Romance Variee and 3 Lieder from the first year of her marriage to Robert, beautifully sung by Chloe Lankshear. The lecture was capped off by his piano trio in G minor with SSO concertmaster Andrew Haveron joining Farid and Howlett.

A program of three major works in scaled-down arrangements made for an entertaining Thursday evening recital at the Capital Theatre, beginning with a stunning performance of Mendelssohn’s arrangement of his Symphony No. 1 with Farid and four-handed Borah on the Kawai grand piano and violinist Rachael Beesley and Howlett providing the strings.

The spirit of the late soprano Taryn Fiebig was evoked with the setting by Ian Grandage of two of Richard Strauss’s pieces Last four songs for soprano and piano quintet featuring Lankshear, fittingly the recipient of Pinchgut Opera’s first Taryn Fiebig Fellowship.

Harpsichordist Howard Nicholson’s arrangement of Haydn’s “Surprise” Symphony is aptly named, being scored for four violins, two violas, two cellos, duet with piano, harpsichord and trumpet. The musicians enjoyed the performance as much as the audience – it’s hard not to smile with Haydn’s music, especially in the Minuet which was lent an almost carnival feel by Nicholson’s keyboard embellishments and David Elton’s playful trumpet. 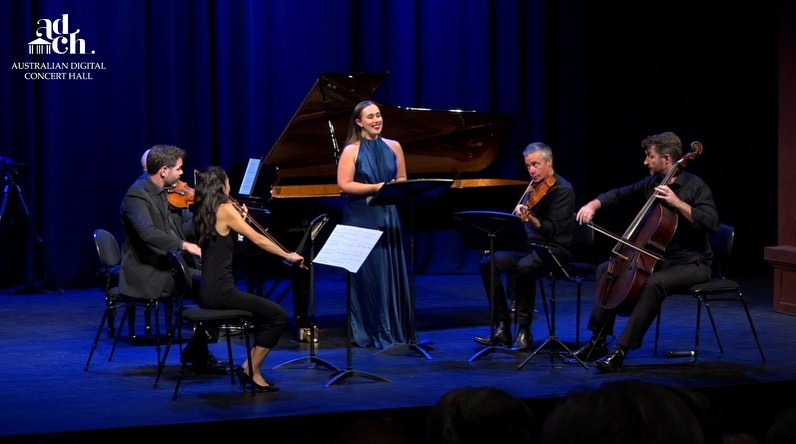 Lankshear took us on a “sequential” journey for his morning recital with pianist Farid. Based on excerpts from cycles of melody by Richard Strauss and Messiaen, she has mixed them to trace the trajectory of a life or a love story, including songs by Purcell, Rameau, Satie, Debussy, Ravel and Crumb. Starting with Strauss’ (beautifully executed) acrobatic vocal leaps Loveshe showed her acting skills with Rameau To the Tongues of Apolloopera Plate in which she recently appeared for Pinchgut Opera, and her impressive dramatic expression in Ravel Kaddish.

Penny gave us a fascinating analysis of Dvorak’s String Sextet in A major. 48, the final piece from the Saturday Night Mayor’s Gala Concert (read a full review of that concert here). It was written in just two weeks the year after his rush to fame with the Slavic dances. Sophie Rowell and Natsuka Yoshimoto, violins, and Tobi Breider and Stephen King, violas, and Penny and Howlett, cellos, illustrated the talk with excerpts.

The Summer Nights Series 3 concert got off to a good start with a delightful rendition of Schumann’s Violin Sonata No. 1 by Yoshimoto and Borah. On a lighter and more refreshing note, Elton performed Hummel’s Trumpet Concerto in E flat major backed by a trio of pianist Farid, Beesley on violin and Howlett on cello. Elton explained that Hummel had toured the work in this form a year before the full orchestra version was premiered.

The evening ended with Mendelssohn’s Second String Quintet, written two years before his death, performed by Rowell and Haveron, violins, Breider and King, violas, and Penny, cello. After this performance, it is difficult to understand why the work is so rarely heard.

Festival-goers should not have been disappointed by the hastily organized recital of emerging artists on Saturday morning with the exciting young violinist Emily Su. When Grace Clifford first pulled out with a hand injury and substitute Sulki Yu had to self-isolate as a close contact with COVID, Su stepped in at the last minute and brought the pianist with her. accomplished from Melbourne Laurence Matheson.

Gold Coast-based emerging artist ACO wowed audiences with her performances of four virtuoso works. Admirable and well controlled in the Adagio and Fugue from JS Bach’s Violin Sonata No. 1 in G minor, she showed her power and passion in Cesar Frank’s sonata with wonderful backing from Matheson. It was a memorable and well-formed performance from this romantic favorite. She denounced the broken finger of Fritz Kreisler Recitavo and Scherzo-Caprice and finished with Tchaikovsky’s irresistible Waltz-Scherzo in C major, op. 34.

Lankshear was indisposed for the twilight concert on Saturday, so we didn’t hear a tune from Domenico Scarlatti. Nicolson’s rendition of Bach’s Harpsichord Concerto in A major, BWV1055, accompanied by a string quartet conducted by Beesley opened the baton and, as a replacement, Howlett played Arvo Part’s Spiegel in Spiegel with Farid at the piano.

We hadn’t heard much from Mozart until now, but his Piano Quartet in G minor K478 was a spirit lifter after Part’s chilly, spacious tinkling. De Borah, as always dependable and confident, was joined by SSO duo Haveron and Breider with Howlett on cello.

There was a festive air for the farewell concert on Sunday morning. Bach’s sunny Sonata in G Minor for Violin and Continuo set the mood with Beesley and Nicolson intertwining beautifully.

Jean-Baptiste Arban Venice Carnival The variations on a traditional Italian song were a brilliant showcase for Elton who pulled out his remarkable bag of tricks – double melodies, trills and leaps. 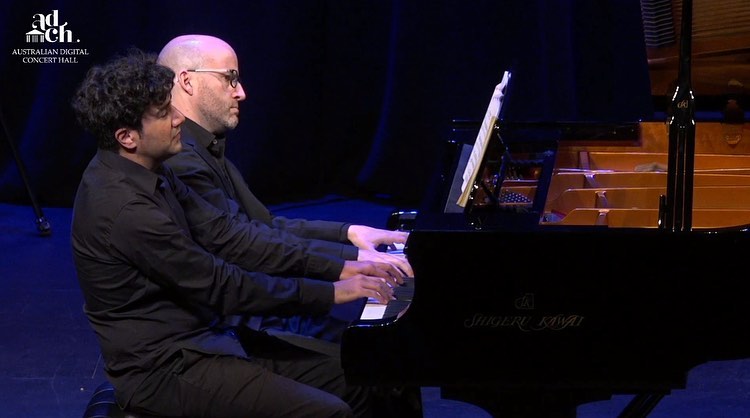 Bach Cantata Jauchzet Gott in Allen Landen saw Lankshear make a welcome return to the stage without any audible evidence of the indisposition that had kept her out of the Saturday programme.

There was a beautiful symmetry in the soprano that closed the festival with the lively Bach Hallelujah! five days after she opened it with a cantata by Vivaldi.

Find out more about this year’s Bendigo Chamber Music Festival at their website.