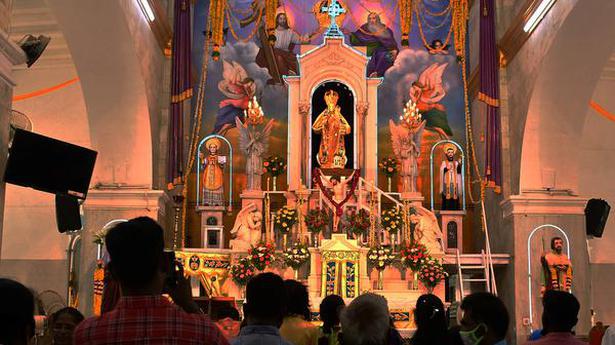 The annual 11-day Notre-Dame des Neiges festival, which typically attracts a few lakh worshipers from various parts of the country, began with the flag hoisting on Monday, but without the participation of worshipers due to COVID-19 lockdown standards for the second year in a row.

As the pandemic-induced lockdown is also in effect this year, it was announced by the Roman Catholic Bishop of Thoothukudi Mgr. Stephen Antony that the annual festival would be celebrated without the participation of devotees.

As a result, only a few, including members of the parish council and police officers, were present when the bishop raised the flag in front of the shrine on Monday morning in the presence of the rector of Notre-Dame des Neiges Basilica, the Rev. Kumar Raja after mass at 5:30 a.m.

The Holy Mass celebrated early in the morning, the hoisting of the flag, the coronation of Our Lady of the Snows at noon and the sermon and blessing with crucifix at 3 p.m. and the novena in the evening were broadcast live on the YouTube channel of the church of the Basilica of the Snows. All of these sacred events would be broadcast live on the channel until the end of the festival on August 5.

Under the leadership of Police Commissioner S. Jayakumar, more than 400 police officers were deployed and barricades erected on all roads leading to the basilica.