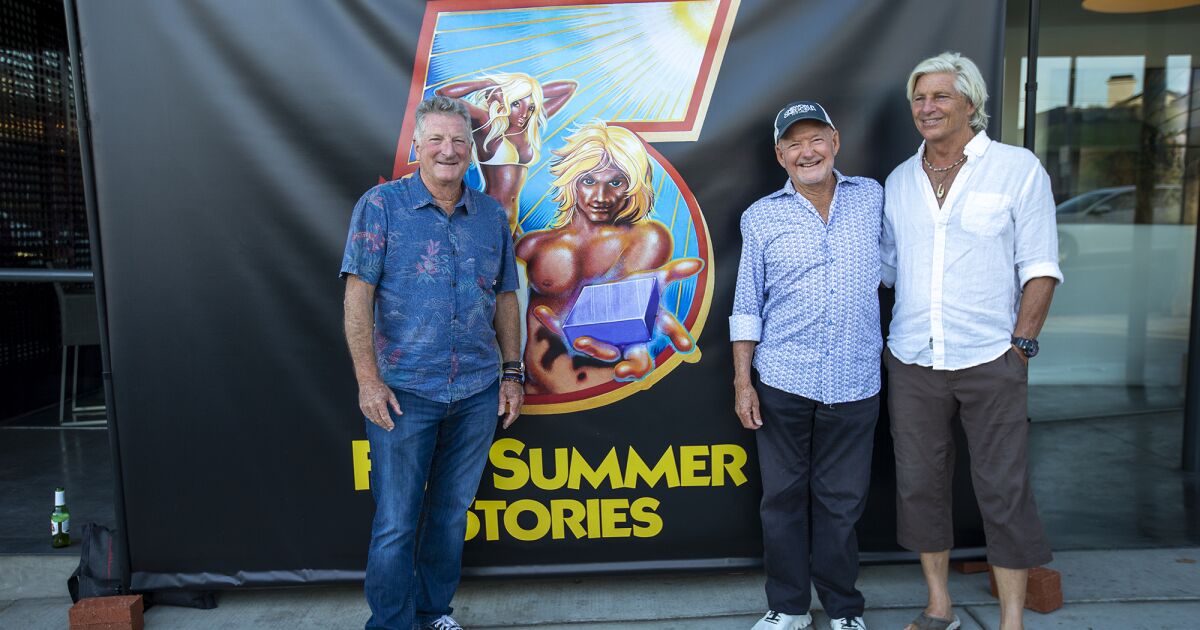 The Coast Film and Music Festival continues this weekend at the Festival of Arts grounds in Laguna Beach.

Saturday night will feature a screening of “Facing Monsters” followed by a Q&A with professional big wave surfers Kerby and Cortney Brown.

Sunday evening will be highlighted by a celebration of the 50th anniversary of “Five Summer Stories,” which will be narrated by director Greg MacGillivray and Sam George. The evening will also include a live musical performance by Honk during selected scenes.

The South Laguna Community Garden Park will host a potluck festival Saturday from 2-4:30 p.m. at Garden Park, located at the corner of Eagle Rock Way and South Coast Highway.

Participants are requested to bring a dish to serve at least 10 people. Billed as a “zero waste” community gathering, attendees are also encouraged to use reusable utensils.

The Garden Band will also be there.

Orange County Soccer Club will face Germany’s Hamburg SV in an international friendly on Tuesday at 7 p.m. at the Championship Soccer Stadium.

This will be the first time Orange County will face a European opponent. Hamburg currently sit second in the Bundesliga 2 table.

“International matches, especially against a historic German Bundesliga team, are always special, and it gives our players the opportunity to shine,” said Orange County Soccer Club chief executive Oliver Wyss. “Hamburg, who have [been] the six-time German champion has a very strong roster this season, and we look forward to playing and welcoming them to Orange County.

There will be a German Oktoberfest, as well as a World Cup theme for the match.

Students in Estancia High School’s award-winning drama department will kick off their 2022-23 season Thursday with Kate Hamill’s “Little Women,” adapted from Louisa May Alcott’s classic novel, in evening performances that will run until Saturday.

“Little Women,” takes place Thursday through Saturday, 7 p.m., at Estancia High School, 2323 Placentia Ave., Costa Mesa. Tickets are $10 for students and $15 for general admission and can be purchased at the door or online at estanciadrama.com.

Costa Mesa Councilwoman Andrea Marr will talk about her career in the United States Navy and what she learned about leadership at a reception Nov. 20 at the Costa Mesa Historical Society.

After earning her nuclear engineering degrees, Marr worked for the US Nimitz, where she led a division of 20 nuclear-trained machinists for two years. She will also talk about how her professional life benefited from the influence of Admiral Hyman Rickover, considered the father of the nuclear navy.

A reception will be held at 2 p.m. with the program to follow at 2:30 p.m. at the Costa Mesa Historical Society, 1870 Anaheim Ave. Space is limited.

Orange County Public Libraries, in conjunction with 5th District County Supervisor Lisa Bartlett, will celebrate early and family literacy at the Aliso Viejo Library on Saturday, November 19 from 11 a.m. to 2 p.m., where they will host a variety of activities for the whole family.

The library is located at 1 Journey, Aliso Viejo. For more information, visit ocpl.org.

The OC Exhibition and Events Center Board of Directors selected member Newton Pham for a one-year term as board chair, while board member Nick Kovacevich will serve as vice-chair.

Board members voted on the nominations at a meeting Oct. 27. Pham, a Fountain Valley resident, has served on the board since 2016. A graduate of San Diego State University, Pham is executive vice president and head of leveraged finance at California Bank & Trust, the California division of Zions Bancocorporation.

Kovacevich is the managing director of Greenlane Holdings, Inc., a provider of cannabis-based ancillary products and accessories. An entrepreneur who co-founded KushCo Holdings and BigRentz, an Irvine-based technology company, the Newport Beach resident joined the board in 2020.

Pham replaces outgoing president Doug LaBelle, who will continue to serve on the board.

Versteeg was instrumental in achieving many financial and program goals during her 10 years as executive director of the Santa Ana child care agency, Orange County Head Start, where she oversaw a annual budget of $45 million. Previously, she was the Child Development Coordinator for the Santa Ana Unified School District, where she oversaw state and federal early childhood grants.

“I couldn’t be more excited about this new chapter of our organization,” TLC Founder and President Tilly Levine said in a press release. “Colleen brings so much experience to our field – she will be a perfect fit for our culture, values ​​and mission.”

The Queenscliff Music Festival kicks off with a free concert